Home » Individual ACA Rates are Going Up, Up, Up – Here’s Why 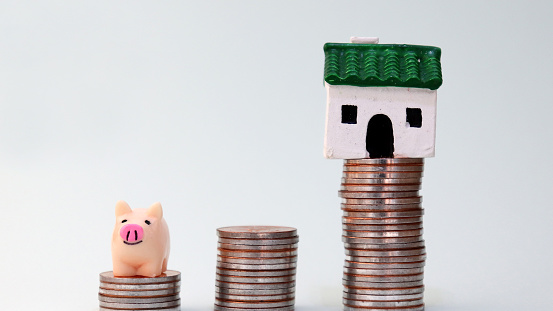 A piggy bank and a miniature house on top of a pile of coins.Some areas could see rate increases up to 98 percent

Next year may see health insurance premiums on the Affordable Care Act (ACA) Marketplace exchange increase 15 percent, although some states could see rates up to 98 percent higher. For instance, insurers in Maryland requested premium increases between 24 and 98 percent for individual health plans.

The Marketplace is operated by the federal government as a place where individuals can purchase health insurance online and to receive a tax credit and other savings if they qualify. Some states run their own exchanges. Open enrollment for purchasing 2019 plans runs Nov. 1, 2018, through Dec. 15, 2018. Plans sold during open enrollment are effective Jan. 1, 2019.

These summer insurance carriers started sharing their 2019 rate requests, and the Congressional Budget Office (CBO) released the information to the public. According to the CBO, the second-lowest-cost silver plan listed on ACA exchanges are expected to rise by 15 percent in 2019 and future plans will increase an average of seven percent per year through 2028.

Keep in mind that in October 2017, the Department of Health and Human Services announced that premiums would rise by an average of 37 percent in 2018 and the actual increase was far more conservative. Therefore, the 2019 increase may not be as high as expected.

How We Got Here

One of President Donald Trump’s campaign promises was to repeal and replace the ACA, also known as Obamacare. Republicans, however, were unable to come to an agreement on healthcare reform in 2017. Instead, Trump and the GOP-led Congress began taking measures to dismantle some of the health law’s core components. Observers expect that the program eventually will die and be replaced with a new health plan. Meanwhile, these changes, along with other factors are causing premiums to rise rapidly.

While there is no single reason for the higher-than-expected increases, here are a few of them:

1   Elimination of the individual mandate in 2019: Beginning next year, individuals will no longer be penalized if they don’t purchase health insurance. Some people applaud the change and believe people should not be forced to purchase insurance. Others worry that only sick individuals will seek coverage and that there will be fewer healthy people to offset costs. Healthy people are necessary to help defray the costs of providing coverage for those who use it most.

2   No more cost-sharing reductions: President Trump announced that subsidies would no longer be given to lower-income individuals and families earning between 100 percent and 250 percent of the federal poverty level. The original subsidies should have been approved by Congress, but weren’t — therefore the House of Representatives leadership deemed the subsidies illegal. However, the Advanced Premium Tax Credit remains in place and helps lower premiums for individuals and families earning under 400 percent of the federal poverty level. In 2017, before the changes, observers estimated that more than 7 million of the 12.2 million enrollees qualified for cost-sharing reductions.

3   Insurers leaving the marketplace: Many insurers have not found Marketplace plans profitable, which means there are currently fewer insurers offering plans and fewer plans available.

4   High medical costs: Medical costs for 2019 are expected to increase between five to eight percent — the same as 2018. Observers believe the increase in prescription drug costs to be about the same as all medical spending.

5   Risk pool composition: When premiums are based on a group of people, the rates usually are lower because the risk is shared. But sometimes those rates can be high if the risk pool has a disproportionately large number of people with high medical claims.

In comparison, small group health plan prices through private insurers are expected to remain the same or may even decrease.

If you investigate individual plans on the Marketplace and discover that premium rates are too high for your pocketbook, check with your broker who may be able to find a plan that meets your needs and budget.